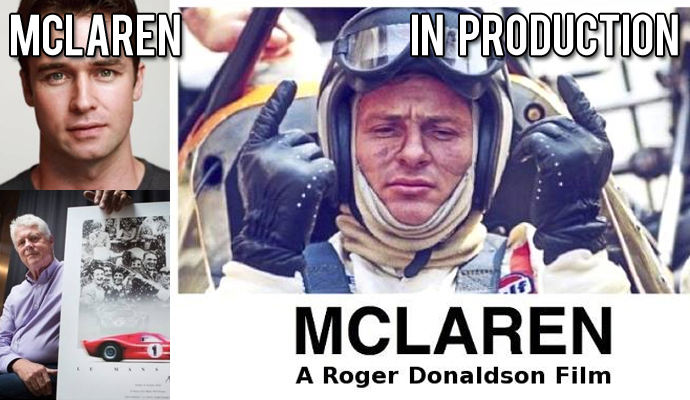 Dwayne Cameron brings the legendary race driver Bruce McLaren, who was killed in a racing accident in 1970, back to life in a gripping documentary.

Director Roger Donaldson, the man behind THE WORLD’S FASTEST INDIAN, is now making MCLAREN and chose Dwayne Cameron to play him.

MCLAREN wrapped filming in May 2016 and will hit the NZ screens in the near future, currently in post-production.

According to Roger Donaldson: “He was very typical, in a way, of what New Zealanders consider themselves to be. He was very unassuming, he had a great personality. People loved him for what he was, he didn’t have any pretensions and yet he was very unique in the way that he managed his business.”

Dwayne was contacted for the role and began filming within a week, so not much time left to prepare, but he himself says about McLaren that: “He was this upbeat guy who followed his passion diligently, built his cars from the ground up, took on the world and won and he changed the motor racing industry forever. I’m happy his story is being told and I hope it inspires many people to follow their dreams.”

He also met McLaren’s family and some of the racing world’s legends during filming:

“It felt very special that day. While we were filming, the wedding guest extras were asked who in the room had been at Bruce’s real wedding in 1961 and half a dozen people put their hands up.”

“In 1966 McLaren and Amon teamed up to win the 24 hours of Le Mans and the third member of the trio, Denny Hulme, was the Formula One world champion in 1967. Here I was sitting at the lunch table dressed as Bruce McLaren in his full racing gear talking to the real Chris Amon 50 years later.”

XYZ Films has US rights to MCLAREN so it will shape up to be a truly international project.