The daughter of the infamous leader of the Locos has always had to live with the shadow of Zoot hovering over her. Born in the confines of the mall, Brady is initially rejected by her mother, Trudy, who is dealing with post-natal depression. Brady is named after a playful pairing of ‘Trudy and Bray’ – the man who Trudy really wishes she could have had the child of.

Ultimately unable to cope with both the situation and her baby, Trudy abandons Brady. It is only whilst spending time within the Nomads that Trudy comes to the realisation of just how much Brady means to her. On her return to the mall, Trudy begs to be reunited with her child.

From this moment on, Trudy does everything within her power to look after and raise Brady.

When the Chosen make their presence known, it is through Trudy and Ebony’s memories of the past that we realise that Trudy could have ended up with the other brother – that Bray could have been Brady’s father. But this fate was not to be.

Captured by the Chosen and brainwashed, Trudy and Brady re-emerge as both the Supreme Mother and the Divine Child, due to their connection with Zoot.

Known amongst the Chosen circle as the Divine Child, Brady does not get to spend much time with her mother – kept as an encouraging tool to force Trudy to do the Guardian’s will.

When Trudy heads out to find the exiled Amber and Bray, Brady gets to welcome her cousin into the world when Trudy discovers Amber alone in the barn and about to give birth. In a ceremony by a lake, Amber names him after his father, Bray. It is this event which sees Brady spending time within the Gaian Camp.

Taken away by the Technos, Brady is spotted by the shocking re-emergence of Tai San before being reunited with her mother.

When events with the Technos come to a head, Brady manages to escape alongside Trudy and the other Mall Rats.

With Trudy’s old depression resurfacing due to the situation on board the trawler, Brady witnesses her mum’s growing hysteria. Thankfully, she is distracted from events thanks to Darryl’s unceasing efforts to keep everyone’s spirits up, especially the younger members of the tribe. Making it safely to the island, Brady has a lovely time playing on the beach with Lottie.

As part of her new role within the Legion tribe, Ebony attempts to capture Brady, but she is thwarted in her plans – only ending up with Ram.

It seems that it always comes back to Zoot. With the Collective desperate to get their hands on the daughter of Zoot, Brady soon finds herself captured alongside Trudy thanks to the seductive Bounty Hunter, Connor.

In a desperate battle back in the mall, the Mall Rats risk their lives to protect Brady from the Guardian and the Zootists. 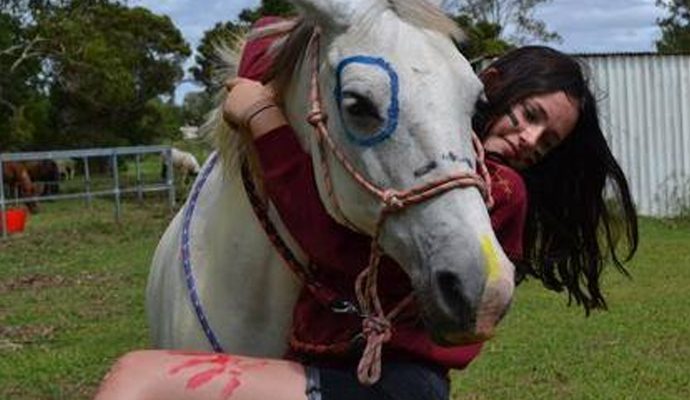 Georgia Taylor-Woods (Brady) shows us what her character could be like all grown up!