Dal is a practical jack-of-all-trades who can turn his hand to many different areas, including carpentry and medicine. A close friend of Amber’s, Dal ends up in the mall after an encounter with Salene, Patsy, Paul and Cloe, when they all escape from both Lex’s group and the Locos. Due to his dream of heading to the countryside and living off the land, Dal is initially reluctant to remain, but he soon finds himself surviving alongside the others within the mall.

Aiding Jack with his various inventions, Dal quickly takes on a role as the engineer of their projects; being hands on and putting Jack’s ideas into working practical models. Dal is also tasked with being the tribe’s doctor, taking the knowledge which he has learnt from his parents and using it in this new world.

Dal however makes one of the fundamental mistakes between a doctor and their patient, where he begins to develop a fierce sense of protection, and indeed affection, for Trudy as he helps nurse her back to health after Brady’s birth. Suffering from post natal depression, Trudy decides to leave the mall and start a new life. Dal, whose dream still lingers at the back of his mind, decides to go with her. The two begin a brand new life together. Though Amber is shocked, it really comes as no surprise – Dal has never felt a connection to the city and you could say that this move is inevitable. But the fact that he didn’t even say goodbye shows the gulf that had opened up between them.

After Trudy returns to the mall unable to abandon Brady, Dal also realises that his home is indeed within the Mall Rats, but he is soon captured by the now not-so-friendly Nomads, who turn out to be slave traders. In his captivity Dal encounters a new friend, Sasha, before the two are rescued during the events within the Tribal Gathering.

As the virus re-emerges, it is Dal who takes point in uncovering the secrets on Hope Island, and then when the group set their sights on Eagle Mountain, Dal remains true to form, his practical thinking ensuring that the tribe are prepared on their trek to the mountain. Dal makes sure that the tribe has maps and a compass and is completely dismayed when Jack loses them. However, the tribe do make it to their destination … and discover that there is an antidote to the virus.

Though the events on Eagle Mountain, and the loss of Amber, hits Dal hard, this young man however remains focused on the trials facing the Mall Rats. Though you would expect his practical thinking and expertise to be used in the analysis, creation, and distribution of the antidote to the virus, Dal however turns his sights to the farm which we are introduced to via Alice and Ellie.

With his dream of living in the countryside and growing food off of the land, Dal is an easy fit for farm-work, and he revels in life there as he helps out on the farm alongside Ellie. Farming is all Dal has ever wanted to do since the new world, and he finally gets his chance. He is overjoyed with being in the country, growing his own food and really flourishes in this environment. He also finds a lot of his time devoted to Ellie. He spends time working on the news sheet with her and making her gifts … but all this achieves is a wedge between both himself and Jack.

They often bicker and argue which culminates in a fight. Despite being best friends, Dal cannot get past his feelings for Ellie, and the rift with Jack widens even further.

Escaping from the clutches of the Chosen alongside Bray, Lex and Ebony … Dal is stunned to uncover the empty grave on top of Eagle Mountain and what this could mean. As Pride leads them to the secluded shelter of the Gaian Camp, Dal is shocked to his core … Amber is alive! Dal is overwhelmed with the return of his old friend, but he doesn’t let this hold him down for too long as the threat of the Chosen is still looming over them all. Though Amber, or Eagle as she is now known, initially refuses to speak to the Mall Rats, it is to her old friend that she finally opens up to.

Dal continues within the Resistance, and the joint efforts of the Gaians, as they try to fight back against the Chosen. He is involved in a rescue attempt with Trudy and, unfortunately, it is here that he meets his demise. In a touching scene with Amber, Dal falls from a height after a chase involving the Zoot worshiping tribe ends in complete disaster.

In the tragic aftermath, Dal is buried on a mountaintop. Yet it is this event which drives Amber to re-affirm her decision to fight on against the Chosen. 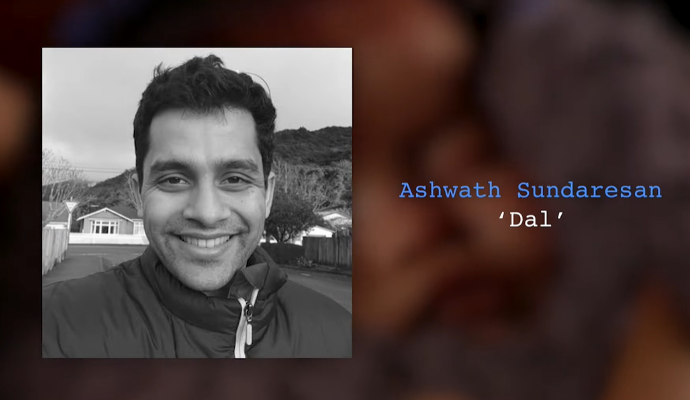 Raymond Thompson hosts a lockdown interview with Ashwath Sundaresan. Ashwath played the role of Dal in The Tribe.

In order to search for the cure the tribe must leave the mountain and return to the city where the antidote is rumoured to be hidden. As they prepare for the journey, a horrific accident occurs.