An intelligent, strong willed, and slightly rebellious young woman, Ellie is driven by a desire to uncover life’s hidden secrets. Though it seems like a laudable goal, there are some truths which need to be buried, and some lies which need to be spoken, for the greater good. It is a concept however that Ellie will gradually struggle with. Though she initially believes that knowledge is the gift of everyone, she gradually begins to realise that the world – especially this one – isn’t always so black and white.

When we first meet her, Ellie has just caught the virus after rebelling against her sister, Alice, by venturing into the city. After Alice gets her hands on the antidote from the Mall Rats, Ellie immediately latches on to the group and the escape from life on the farm. Alongside her sister, the two quickly become integrated into events and the tribe.

Ellie strikes up an instant friendship with Jack, and it is clear there is something between them, even though neither of them knows how to approach the situation. Uncertain how to deal with his feelings, let alone her own, Ellie plays tricks on him when Jack attempts to open up to her. Eventually, the two do become a couple. During this time it is obvious that Dal is also interested in Ellie. She downplays it and makes it clear they are friends. Jack however begins to become very jealous and it causes a problem between both him and Ellie, as well as between himself and Dal. Their friendship is put to the test, and is never again quite the same.

With her drive for knowledge, Ellie starts up a newsletter with the help of Jack. They are set on discovering more about the virus and how it started. It could be important to know this for the future. Eventually they find evidence that Danni is somehow involved, and it is soon revealed that her father was one of the scientists who helped cause the virus. It is here that Ellie is faced with her most difficult choice – whether she should tell the world the truth, including Danni’s connection to it all. Grudgingly, she realises what little good this would do anyone, and the damage it would do to both Danni and the Mall Rats. She lets it go.

Ellie’s newsletter is also one of the ways in which the Chosen begin to take control of the city with lies from Wolf making her print that the Chosen are finished. Ellie begins to find out that kids are being kidnapped, and starts to look into this, not knowing that the Chosen are behind it all.

When the Chosen invade with their full force, Ellie is captured and put to work within the mall. She convinces Jack to try and escape but he is caught and taken away. Distraught, Ellie vows to help the resistance and to keep fighting back. She helps to create flyers against the Chosen, puts spies to fight them from the inside out, and also tries to bring them down. Realising the attraction that he has for her, Ellie gives in to Alice’s suggestions and attempts to get close to the Chosen Lieutenant, Luke. She begins to gain crucial information, and better supplies, for them all.

Yet the act soon develops into something more, as Ellie realises that she has genuinely developed feelings for Luke. With no clear way out, Luke decides that he must leave the Chosen. Ellie takes it upon herself to help to hide him and keep him from being captured. When the resistance take the Mall, Ellie thinks that she and Luke can finally be together. However, Jack’s return in the aftermath of events puts a spanner in the works. Ellie makes excuses with Jack and finally tells Luke how she feels about him. But with the city’s hostile feelings concerning the Chosen and his part in events, Luke knows that his time is limited.

He is soon kidnapped by the Guardian, and disappears.

With the Techno’s invasion of the city, Jack and Ellie head out to investigate. They manage to rescue Dee from an encounter with the technologically advanced tribe, and tries to mount a defense against them. It is during this time however that Jack is captured and taken away. Ellie is floored by events. She had already lost him like this once before, her sister was taken away, and Luke also went missing … it is all far too much to take and pushes Ellie into a fit of depression. She contemplates suicide and tries to jump off the mall roof.

Ellie however is saved by the innocent nature of the new younger members of the tribe – Charlie and Mouse. It is this event which twists Ellie’s depression into anger. She realises that Ebony is firmly to blame for Jack going missing and tries to kill her. Her attempts fail and she is captured by the Technos. Seeing the situation, Jay offers her a mild reprieve, arranging things so that Ellie will be united with Jack in his imprisonment.

Despite Jack’s return to the mall with Ram’s fall from power, we do not yet know Ellie’s fate. It is some time later that she re-emerges, though we are uncertain whether the amnesia was from some physical trauma or from the Reality Space experiments of the Technos. Regardless of what caused it, Ellie possesses no memory of her past, and Java instantly sees the opportunity. Recruiting her into the new breed of Zootists, Java sees that she can be of use despite Ebony’s reservations. Pretending to help her through her circumstances, Java instead gives Ellie and bomb and sets her loose on the mall.

It is thanks to Jack that the bomb is gotten rid of and no one is hurt. Ellie eventually regains her memory, and she reignites her relationship with Jack. As events soon come to a head with the fight against Mega and the Technos, Ellie is forced to board the trawler alongside the others, stunned by the realisation that they may never see their home again.

As the situation on the trawler, and then the Jzaho Li, turns dire, Ellie remains optimistic, certain that if anyone can figure things out, it is Jack. But Ellie’s anger begins to rise when it becomes clear that Ram is keeping secrets from the tribe, and keeping them in the dark is placing them all in grave danger. This sentiment grows when Jack and Lex go missing on a scouting trip from Camp Phoenix. Ellie blames Ram for it all, and tension rises.

Unknown to Ellie, the two were captured by the resident Natives of the island, and after the hurdles of the cultural and language difficulties are passed, the two tribes realise that they have a common enemy – the mysterious Collective tribe. Planning their counter-attack, Ellie leads a team alongside Jack and Lia to the Legion’s base onboard an oil rig. It is during these events that Ellie is caught by a female guard, and in a threatening gesture, her hair is sheared off haphazardly. Ellie manages to incapacitate the guard in turn.

Making it back to safety, the Mall Rats defeat the Legion and come home with the biggest prize that they could imagine … the return of Bray.

As the Mall Rats continue to try to decipher the various mysteries surrounding the Collective, Ellie begins to take more of a step back from events, now taking on a more supportive nature to the rest of the tribe. She continues to push and praise Jack for all of his efforts when they head to Arthurs Air Force Base, knowing that there is nothing that he can’t set his mind to.

Events soon see the Mall Rats fighting for their lives against the Zootists and the Guardian, where they are forced to say goodbye to some dear allies. With the secret knowledge of the adults firmly in their grasp however, Ellie is feeling optimistic about the future. 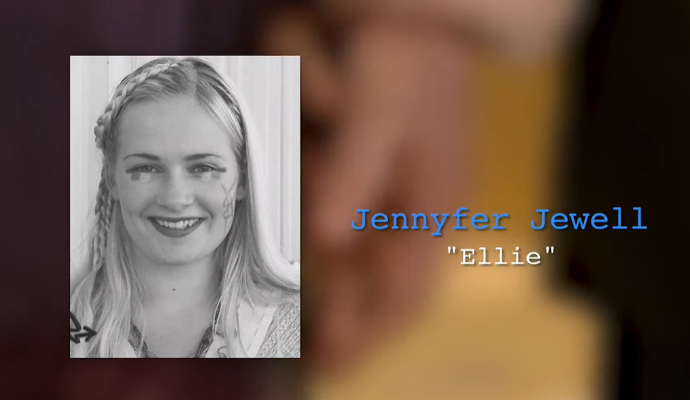 Raymond Thompson hosts a lockdown interview with Jennyfer Jewell. Jennyfer played the role of Ellie in The Tribe. 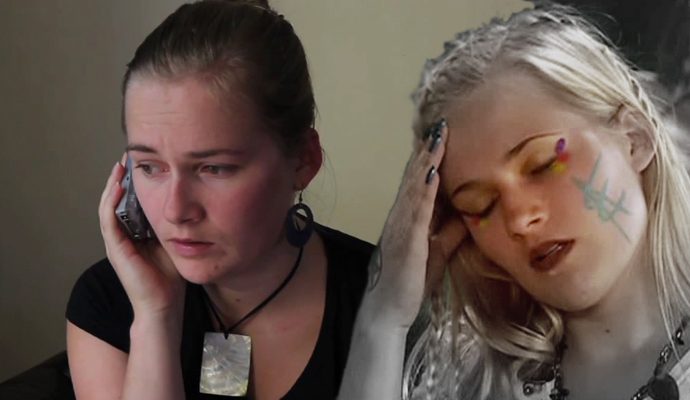 An Interview With Jennyfer Jewell

THETRIBE.CO.UK presents an interview with Jennyfer Jewell who played the role of Ellie in THE TRIBE. 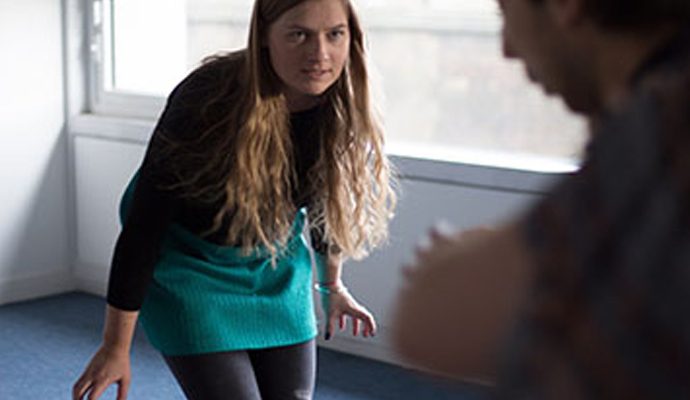 Jennyfer Jewell Performs In ‘Such Stuff As Dreams Are Made On’

Jennyfer Jewell (Ellie) performs in an interactive and immersive theatre production, SUCH STUFF AS DREAMS ARE MADE ON. 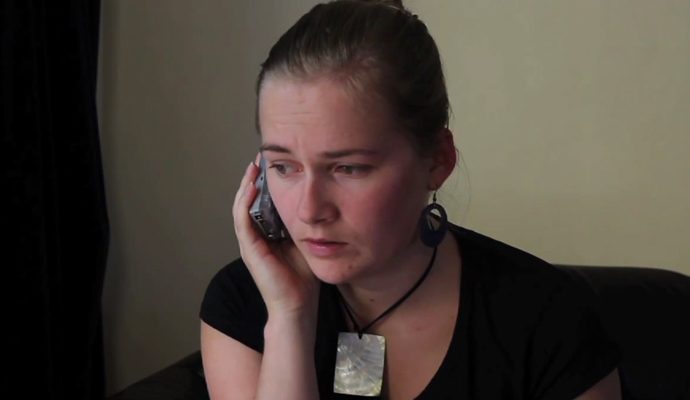 A mother (Jennyfer Jewell – Ellie) makes a desperate plea to a priest when her daughter picks up an unwelcome visitor.