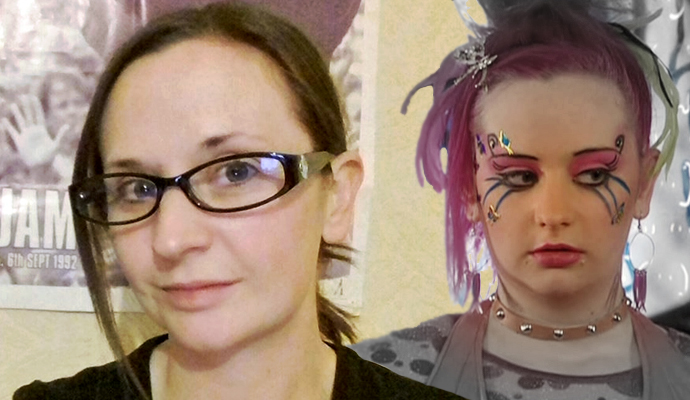 INTRO
THETRIBE.CO.UK gives a very warm welcome to our fellow UK’er fan-in-the-spotlight Mozzie, Kelly Stevenson. Kelly originally took on the role of Dee during series 4 of The Tribe, a streetwise member of the Mozquitos who gets caught up in the Mall Rat’s retaliation against the Technos.

Kelly, we vaguely seem to remember that you won some sort of competition which led to your inclusion within series 4 of the show. What was that competition and how exactly did the role for Dee come about?

I did hear something about it being a competition, but it wasn’t really the case. I was studying music at college at the time and we were holding a concert. I wrote to Cloud 9 to see if it was possible if I could use their backing tracks if they had any. They contacted me to see if I could make a mix tape, which I did. Recording a few tracks on a wonky old cassette player. I was then asked if I was interested in acting. I was.

I flew over to Cloud 9 in New Zealand to audition for a part. I then recorded two tracks in the studio. I was told then that they had this character that they were introducing to the show and asked if I was interested. I then got the part of Dee.

I can’t even imagine how amazing that feeling must have been like – to have been a fan of the show and to then get transported into the world of The Tribe. Were you extremely excited or petrified at the notion of meeting your favourite characters and actors in real life?

I was more a fan of the music. I had seen a couple of episodes prior, so I understood the concept of the show and knew a couple of the characters. I was just excited to audition for a part and the possibility of filming a show in another country.

Are you aware if the character of Dee was tailored specifically to you, or was it a concept that the writers had in place and always intended to introduce? What did you find the easiest, and most challenging, about the role?

Dee was already a concept for the show. I think Dee in herself was a challenge. I was quite a shy person when I was younger, whereas Dee was very outgoing. It was hard to act like that when I didn’t feel like that myself. I loved her as a character though as I feel the confidence that she had, she has passed down to me as I got older.

It was still the infancy of the internet and what would become social media, but even then, there was still quite a bit of jealousy floating around concerning the role. You managed to get what countless fans had dreamed of (not to mention a lot of screen time with fan favourite Caleb Ross – Lex) so there would naturally be a bit of resentment from a minor portion of the fandom.

Were you aware of any of this commentary during or after your time on the show?

Not really no. But then I haven’t read anything after the show. Don’t like to read about myself. In life you have your haters. Not everyone is going to like you or the character. But that’s real in any walk of life. You will meet people you get on with and others you can’t stand to be anywhere near.

I went through the same process as any other actor. It wasn’t handed to me on a plate. I had to fly to the other side of the world in the middle of my exams and audition like anyone else. It was tough. Early starts, late nights, memorising song lyrics to record the following day etc. But I did it because I wanted it!

What was it like having to relocate all the way to New Zealand from the UK? We know that you had a birthday during filming – was it difficult being separated from all your family and friends? Or were you enjoying the ride too much?

Of course I missed family and friends. I was only 17 when I left the UK. But everyone made me feel at home and there was always someone I could talk to if I felt home sick. It helped that filming was long days as well so kept me occupied.

I would have liked to have seen Dee with the Mozquitos a little bit more. It would have been nice to see a darker side of her maybe. I liked who I worked with I think it fit with where the series was going.

The end of the series saw the Mall Rats finding a goodbye note from Dee and Patch, which provides your character with another accolade of being one of the very few characters who ever got a decent send off! What was the decision behind leaving the show?

My contract ended like everyone else. I then continued with my studies at college as series 5 was being filmed. A series like The Tribe has found characters come and go to keep it fresh and I think it was a good idea that Dee decided to leave.

From the old Tribeworld archives, we know that you had a great interest in music, arts and acting. Which of the three do you more naturally gravitate towards?

I would say art. I always have. Acting wasn’t something I wanted to do initially. It just crept up on me. I loved music when I was younger, but has time as gone by I have found other interests, which is what life is all about.

We believe that you are now a Youth Worker. What prompted the move into this profession? And what do you enjoy the most about it?

I have a few jobs. I gravitated towards Youth Work after working for a performing arts company as a drama coach. I enjoyed working with young people in a creative environment. It’s important to keep young people off the streets and give them somewhere else to go. But offer them support and fun in a world where a lot of families are struggling.

And finally, if there was ever a reboot of the show, what actor would you love to play your character?

Oh I don’t know. Anyone who has a passion for what they do and who understands Dee and what she stands for.

OUTRO
Thank you Kelly for taking the time to participate in this interview. We wish you all the best of luck for the future and look forward to hearing from you again.
the tribe dee kelly stevenson interviews cast